The Senate’s Tax Bill Eliminates the Individual Mandate for Health Insurance. Here’s What You Need to Know

Home / The Senate’s Tax Bill Eliminates the Individual Mandate for Health Insurance. Here’s What You Need to Know 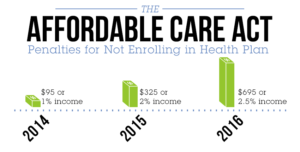 Early Saturday morning, the Senate voted to pass the Republican Party’s sweeping tax reform bill, and among other provisions, the bill would eliminate the penalty for not buying health insurance starting in 2019.

So next year, you still need to be covered — at least, as of now.

The individual mandate clause of the Affordable Care Act (a.k.a. Obamacare) requires individuals to buy insurance or pay a penalty at tax time, unless they qualify for a limited number of exemptions. If the Senate’s proposalsurvives in the final version of the tax bill, then beginning in 2019 consumers will be able go without coverage and not face a fine. The penalty for going uncovered for 2018 will be $695 per adult or 2.5% of household income in excess of tax filing thresholds, whichever is higher.

Members of the House and the Senate will now work to reconcile their versions of the GOP tax bill. Lawmakers have said that they’d like to finalize a tax reform plan by Christmas, so they can send it to President Donald Trump for signing into law. The House tax bill didn’t waive the penalty for going uninsured.

Open enrollment ends Dec. 15 for Affordable Care Act plans. If you’re on the individual insurance market, you have until that date to sign up for a new plan or change your existing plan. While it’s possible that the final version of the GOP tax bill could have a different plan for the individual mandate, that may not become clear until after the sign-up deadline.

For now, the individual mandate penalty remains in place for 2018. Existing customers should shop around rather than allow the system to re-enroll them in their current plans, says Sabrina Corlette, research professor at the Center on Health Insurance Reforms at the Georgetown University Health Policy Institute. There are plenty of bargains out there: Kaiser Family Foundation estimates that more than half of subsidy-eligible, uninsured individuals could buy a bronze-level plan for no premium contribution—that is, a $0 premium.

And regardless of what the tax reform bill says, it’s simply a smart idea to have health insurance. “You should buy insurance because it helps you get access to care, and it’s critical financial protection in case something awful happens,” Corlette says.

You can expect the individual market to look very different if the penalty goes away, experts say. The non-partisan Congressional Budget Office estimates that repealing the individual mandate starting in 2019 would result in 4 million losing coverage in 2019 and 13 million losing coverage in 2027. Many healthy people would voluntarily opt to go without coverage, and insurers could raise their premiums to cover the remaining, sicker population. These higher premiums would in turn cause more consumers to become priced out of the market.

Enter your email address to subscribe to this blog and receive notifications of new posts by email.